Pickle and Peanut is an Disney animated television series that premiered on Disney XD on September 7, 2015. It was created by Noah Z. Jones and Joel Trussell and Mark Rivers. The series is about two unlikely friends -- an emotional pickle and a freewheeling peanut in an innovative mix of 2-D animation and live-action clips to tell the small town adventures of two underdogs who dream up plans to be anything but ordinary.

Add a photo to this gallery 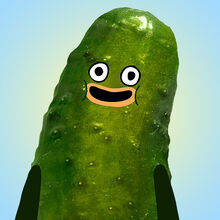 Retrieved from "https://pickleandpeanut.fandom.com/wiki/Pickle_and_Peanut?oldid=6940"
Community content is available under CC-BY-SA unless otherwise noted.